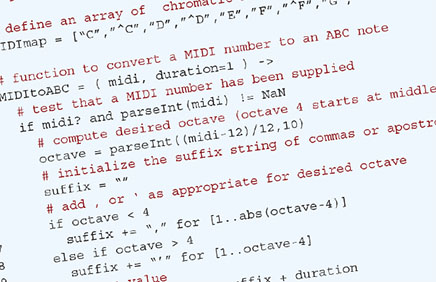 Comparing Scratch [4] to Pencil Code [3] for teaching computing through music immediately reveals a major difference: Scratch represents notes as MIDI numbers, while Pencil Code represents notes as letters using ABC notation [1]. To someone who reads music, Pencil Code is clearly preferable because it is far easier to map, for example, a major third to C and E than 60 and 64. But to those who generate music algorithmically, ABC is not as easy as MIDI. For example, a major third in the key of D is not D and F, it is D and F#. Using MIDI values, however, the interval is always 4 semitones: 62 (D) + 4 = 66 (F#), just as before.

A Solution: If one wants both the clarity of ABC notation and the algorithmic power of MIDI values, a conversion is indeed necessary. The code below runs in Pencil Code and plays the chromatic scale from C3 to C6 by passing MIDI values 48 (C3) through 84 (C6) to a MIDItoABC function that is generalized to convert any MIDI value to its proper representation in ABC notation and play it for a specified duration.

The code below includes a test routine to play the chromatic scale from C3 to C6 with random note durations from a half note ("2") to a 32nd note ("/8").

The Digital Library is published by the Association for Computing Machinery. Copyright © 2016 ACM, Inc.